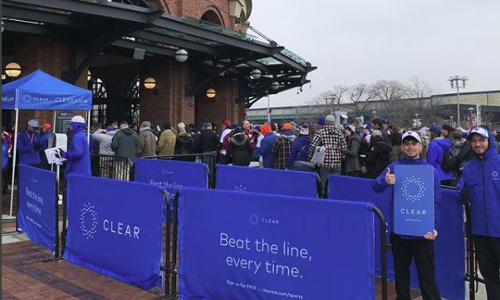 As the MLB season officially kicks off, fans at a trio of ballparks will experience a new way to enter the game. The Atlanta Braves’ SunTrust Park, Oakland Athletics’ Oakland-Alameda County Coliseum and Seattle Mariners’ Safeco Field have all implemented the CLEAR biometric identity platform.

Perhaps most well known in the airport security sphere, CLEAR security kiosks are now used by 11 professional sports teams across the MLB, NBA and MLS.

“Sports venues are starting to look more and more like airports from a security and experience perspective,” says Lauren Stangel, CLEAR’s head of sports and events. “Baseball stadiums in particular, you have 40,000 to 50,000 people entering through the gates almost 50% of which come between 15 minutes before and first pitch.”

During the screening, users verify their identities by pressing a finger to a touch pad or looking into an iris scanner. While users at an airport are required to pay an annual fee, CLEAR makes its stadium access available for free for those who sign up, according to AP. Visitors can enroll in the program right at the stadiums.

“We believe your identity should serve as your wallet and your ticket,” Stangel says.

Watch the video below for a glimpse of how the process works.