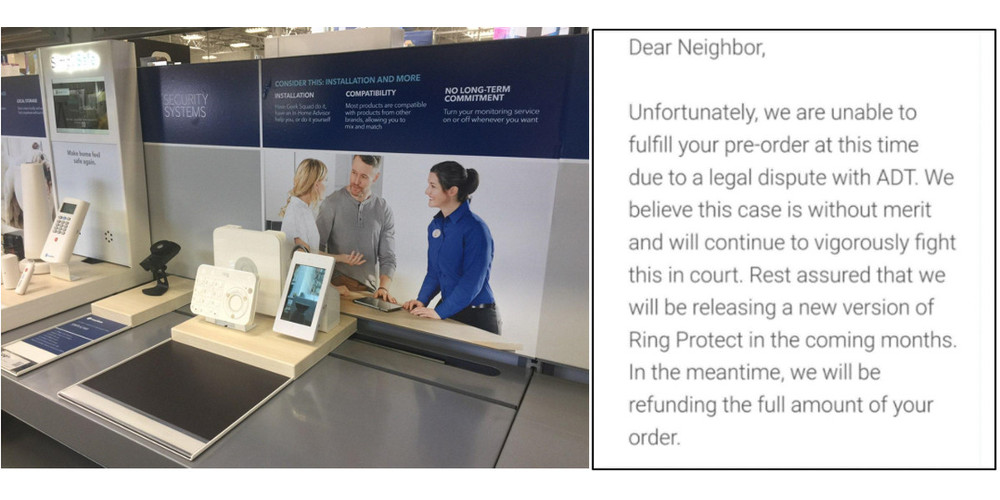 A Best Buy store removed the in-store "shelf talker" promotion for Ring Protect (compare to SimpliSafe, left), and Ring tells customers it will refund pre-orders for the product in wake of ADT lawsuit and temporary injunction.

Ring Protect, the new security and home automation system from Ring (Bot Home Automation), has been banished for now, having lost the first round in a lawsuit filed by ADT.

The judge in the case issued a temporary injunction order, prohibiting the defendant from selling Ring Protect at this time. A final resolution of the case is still to come. Ring Protect is still on display at Best Buy, but with promotional materials removed. And Ring itself has cancelled preorders for Protect. In a letter to customers, exposed by Consumer Reports, Ring writes:

Unfortunately, we are unable to fulfill your pre-order at this time due to a legal dispute with ADT. We believe this case is without merit and will continue to vigorously fight this in court. Rest assured that we will be releasing a new version of Ring Protect in the coming months. In the meantime, we will be refunding the full amount of your order.

We appreciate your commitment to Ring, and are offering a $50 promo code* that you can use toward a Ring Doorbell or Outdoor Camera …

Presumably, the new version of Ring Protect would exclude “trade secrets” allegedly belonging to ADT, which contributed a large chunk of intellectual property (and $36 million) to the Zonoff Z1 platform allegedly pilfered by Ring.

Consumers are praying that Ring prevails in the case because the new product and related service is mind-numbingly cheap and users already love their Ring video doorbells.