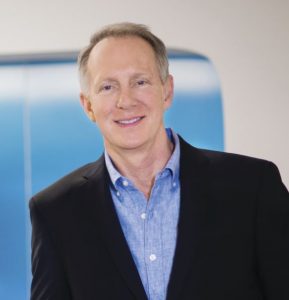 “Working hard, reading everything I can get my hands on and following my passions. Curiosity is probably one of my biggest drivers, as well as mastery of new skills or domains of knowledge. Outwardly, I am motivated by creating new things and seeing them work for people to make their lives or jobs better than they were before. I am constantly looking at new ways to do things and very impatient when I can’t make them happen as quickly as they could in my imagination.

“One of the greatest challenges was guiding my current business during the many years of slow Cloud adoption in the security industry, during the early and mid 2000s. The conservatism of the security industry can be tough on companies with new technologies. We were fortunate to have very patient money behind the company, and a board chairman, Robert Fealy, who shared our vision for where the industry was going.”

“At one of the first ISC West shows I attended, around 2003, I heard that someone else at the show had an IP-based access control panel. I was a bit surprised because I was pretty sure at the time that we were the first ones to ever do that, particularly in the Cloud, if not on a LAN. So I went to the booth of the company that allegedly had this IP-based panel and started snooping around and looking inside their products. What I found was that inside their ‘IP-based control panel’ they actually had a third-party terminal server, otherwise known as a serial to LAN converter, attached with Velcro! I thought, ‘So now I’m competing with people who use Velcro in their products. I wonder how their customers feel about that.’”

“I would like to see greater openness to standards, which is one of the things I’ve been working on for 10 years as SIA Standards Committee chairman. We’ve had some notable successes in recent years, such as the OSDP standard for communications between readers and control panels. But there are many parts of the industry that stubbornly resist standardization, such as the plethora of proprietary Bluetooth credentials that now dominate the mobile credential landscape. You’d think we would have learned as an industry that this never plays out well, and that we will all have to change at great expense at some point in the future, but here we are.”

Being Ahead of the Cloud Crowd

“The early days of my involvement in the industry were spent evangelizing the whole idea of the Cloud and Internet in general. I recall an article in one of the industry publications around 2002 that featured a ‘point-counterpoint’ style debate on whether the Internet would ever be safe for security. What astounded me was that anyone could take the ‘con’ position in this debate. But there were a lot of people who thought it would never be reliable enough or safe enough for security applications, and today, of course, every single company uses IP and Cloud services as part of their security infrastructure.”