Security robots are becoming an extension of smart buildings and smart organizations. They can build models of what is normal, flag anomalies and act to detect, prevent and respond in real-time. See if they make sense for your clients and applications. 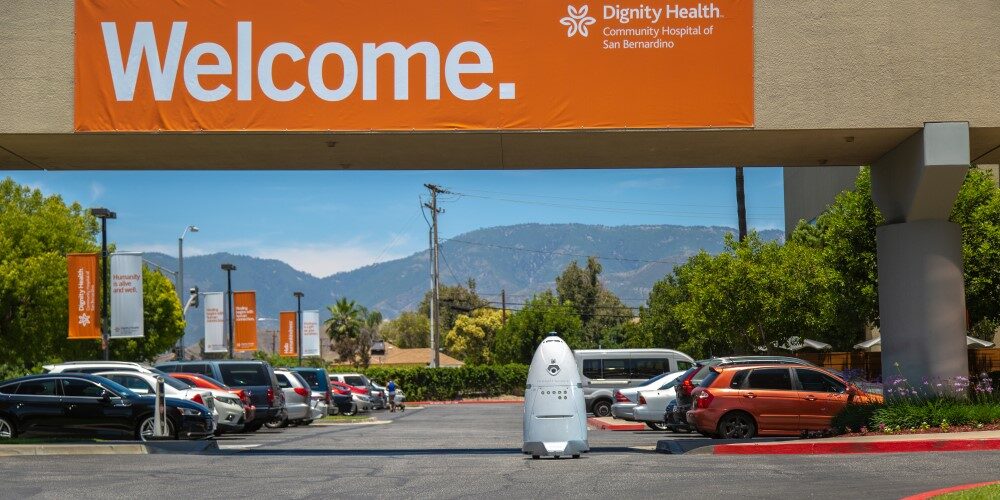 You may have seen them at a corporate campus, downtown commercial high-rise, shopping center or hospital. The use of autonomous security robots in parking areas is on the rise. Why is that, and are they a viable solution for your clients?

Inflation. Rising gas prices. Vehicles parked longer than usual. Skyrocketing values for precious metals. Shifting priorities for police departments. You don’t need to Google “vehicle thefts in 2021” to know that vehicular-related crimes are on the rise across the country. If it hasn’t happened to you, chances are you know someone who has been a victim.

Once every 43.8 seconds, a vehicle is stolen in the United States, according to the National Highway Traffic Safety Administration (NHTSA), with 2020 seeing the most vehicle thefts in more than a decade. 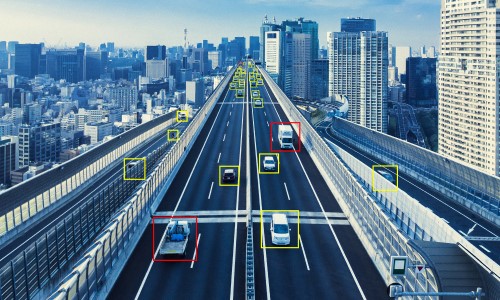 Thieves are stealing catalytic converters, devices that convert the engine’s environmentally hazardous exhaust into less harmful gasses, from cars at an alarming rate, increasing more than fourfold from 2019 to 2020.

It’s a deep sinking feeling when you turn on the engine and hear a rumble like a mini volcano exploding under your hood, only to know that your catalytic converter is suddenly missing. It’s frustrating, expensive and takes your vehicle out of operation for days. The repair can’t be ignored; the vehicle isn’t operable without its catalytic converter.

And with smash-and-grab robberies on the rise, everyone is advised to never leave anything of value visible in their car. Thefts like these cost millions of dollars for owners and insurers, and cause insurance premiums to skyrocket — making everyone a victim. For property owners and businesses, the impact ranges from an upset customer to several fleet vehicles immobilized for several days.

What can be done? As a society, we’ve become numb to stationary cameras. Seemingly, no one cares about them anymore, and thieves brazenly commit their crimes in front of them in broad daylight. Something new is required to change the equation, to deter thieves and prevent vehicle thefts. 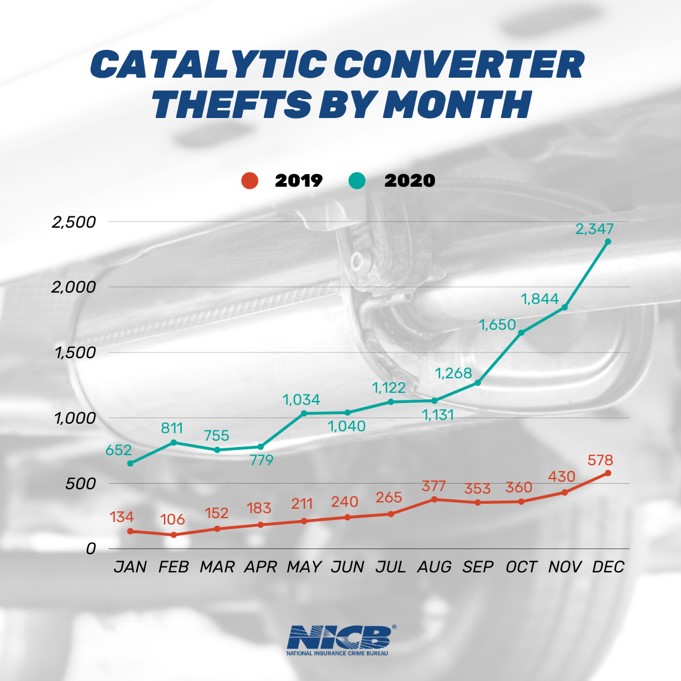 Thieves are stealing catalytic converters from cars at an alarming rate, increasing more than fourfold from 2019 to 2020. Patrolling autonomous robots can help mitigate these losses. (Courtesy NICB)

To address that, the advent of mobile, autonomous security robots present a solution. With the ability to patrol a parking lot or parking structure, providing 360° vision and recording capabilities, these mechanical security guards offer a new tool to augment and complement video security solutions as well as law enforcement efforts.

Patrolling 24 hours a day, these sentries are always alert, always engaged. They won’t fall asleep at four in the morning and are never checking their cellphones. Given a parking lot or garage with a security robot compared to one without, the location without a robot presents the easier and simpler target.

The mere presence of the security robot creates a force-multiplying deterrence to criminal activities and unwanted behaviors.

Beyond the physical deterrence created by its imposing presence, the security robot also provides unparalleled situational awareness to security guards and law enforcement professionals. Many of the features and capabilities built into autonomous security robots are very familiar and currently in use throughout the security industry.

However, instead of mounting these sensors to a wall or building, they are attached to a robot. While the capabilities are quickly expanding, the main ones include facial recognition, ALPR, thermal cameras for heat anomalies, gunshot detection, liquid spills, intercom, public address broadcasts, mobile device detection and human detection.

Applying these advanced technologies to a self-driving, self-charging, fully autonomous robot with the capability to operate 24/7 is an appealing utility for the industry that brings additional benefits.

Whether monitoring a property remotely or onsite with a security operations center or a third-party remote video monitoring service, robots provide a unique capability to investigate an incident and reach areas not covered by cameras, delivering real-time, eye-level video and two-way audio. No more trying to identify a subject by what the top of their head looks like. 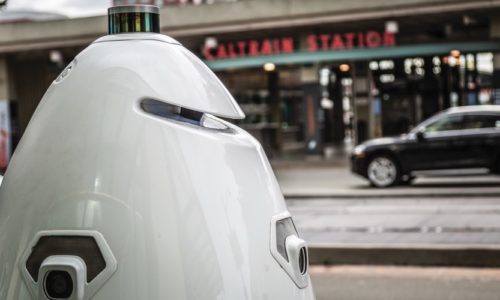 One developer of autonomous security robots has more than 60% of its current fleet deployed in a parking lot or parking structure. Why the high percentage? As stated, parking lots are a common area for crime that directly impacts visitors and employees. But due to their size and physical layout, it can be difficult and costly to secure them consistently.

While these businesses are very different, for most, if not all, it’s extremely important that their employees and visitors are always safe and have the best possible experience while at their property. Robots are helping them to accomplish both.

Many robots patrol at a pace similar to a human walking. With the ability to patrol for at least two hours in between charge cycles of 15-20 minutes, the distance covered is impressive. In fact, it’s not unusual for patrol routes to be 3,000 to 4,000 feet in distance; at times, even in excess of one mile across a single property’s parking area.

When considering common patrol routes for security robots, the type of business conducted inside the building, for the most part, is not necessarily relevant. Whether an office building, manufacturing plant, shopping mall, hospital, etc., the effective use of the robot to deter criminal activity remains the same. The patrol route in this example would come to approximately 3,000 feet, and thus, could be expanded significantly, if needed. 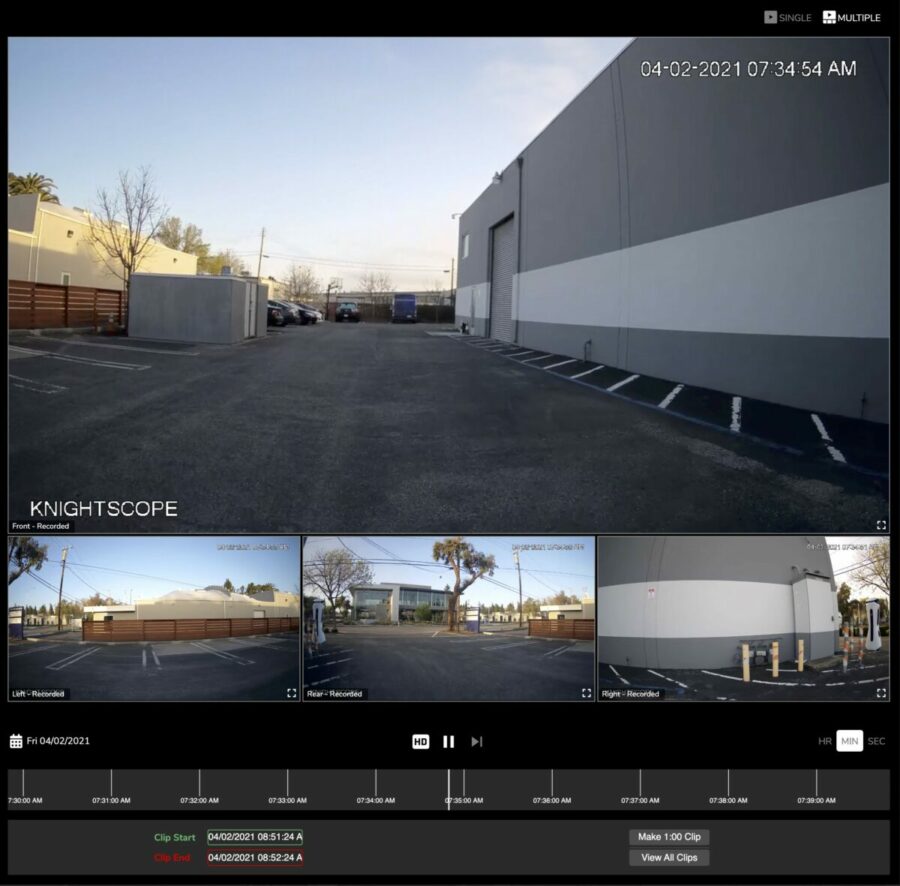 Autonomous robots can augment and automate security programs, with a proven track record of deterring criminal activity. They not only help keep vehicles secure but also employees, visitors, students, patients and patrons wherever they’re on patrol.

For multilevel parking structures, some robots can utilize the same ramps an automobile does to travel between levels. The patrol route is mapped in a similar way as a single level parking lot, with a patrol route for each level.

Depending on the security concerns at a property, some need the additional security of an autonomous robot during business hours, such as a shopping mall, while others have greater concerns after hours when the business is closed.

There are also literally thousands of properties and businesses experiencing a rash of criminal activity, like vehicle and catalytic converter thefts, but can’t afford the high cost of a security officer.

A robot on a part-time schedule may be the solution. It is cost-effective (programs are available starting at less than $900/week and offer integrators RMR opportunities), the schedule is customizable, and it can operate seven days a week.

If you and/or your end-user customer are thinking a security robot is worth looking into further or you have a parking area in mind for one, here are answers to some common questions:

2. How does the robot know where to patrol?
It is a common practice for it to patrol on a predetermined patrol route that is programmed into the robot’s navigation system, based on the specific needs of the property.

3. Can security robots be used in multilevel parking structures?
Some models are capable of traveling between levels using the same ramps as vehicles.

4. How do they stay out of the way of cars?
Equipped with similar technologies used in self-driving vehicles, incorporating LIDAR and proximity sensors into the robot’s navigation system, allows the robot to detect objects, including vehicles, and reroute itself around them, safely within the preprogrammed patrol routes.

6. Does it require someone to plug it in to recharge the batteries?
No, robots can autonomously return to their charging station without human intervention.

7. How long can a security robot patrol for on one battery charge? How long does it take to recharge the batteries?
Battery performance varies, but some can patrol up to 2.5 hours with a recharge time as short as 15-20 minutes. 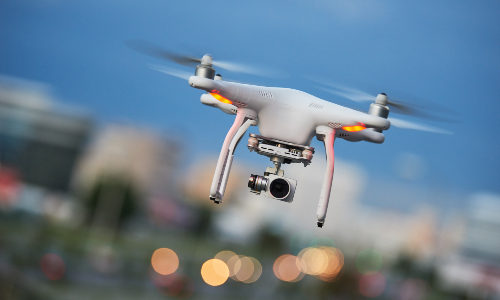 9. What do the robots use for communication?
Cellular service is commonly used, eliminating the need to use the property’s network.

10. Do they operate in the extreme heat and cold?
Yes, there are robots on patrol in the Southwest desert region to the freezing Northeast, operating 24/7, rain or shine.

Oftentimes, adding security cameras (or implementing more video analytics or AI-based capabilities) or security officers to a parking lot is the right solution to a security problem. There are times, though, when an alternative or more is needed.

The use of autonomous security robots in parking areas is on the rise for those reasons. They are an advanced tool being used to augment and automate security programs, with a proven track record of deterring criminal activity. They not only help keep vehicles secure, but more importantly, employees, visitors, students, patients and patrons wherever they’re on patrol.

As a security integrator, it may be time to investigate further and partner with a robotics specialist to expand your portfolio of offerings. 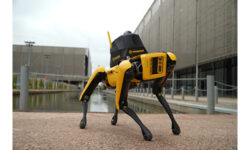 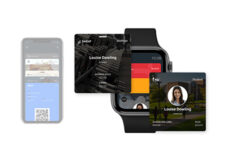