Posing as an ordinary consumer, I recently purchased a SimpliSafe package in order to forensically investigate if claims about its products, compared to professional alarm contractors and the products that the alarm industry offers to the public, are accurate.

I also wanted to technically quantify if the representations of SimpliSafe offering an “advanced home security system” were factual.

To that end, I started by reading the SimpliSafe end-user and/or instruction manual. I then set up the system and proceeded to contact the Boston-headquartered company’s technical support department several times to ask about its products and services.

These questions were related to issues either not clarified and/or not disclosed through its website or in the system installation instructions.

What Exactly Is SimpliSafe?

SimpliSafe is a $229.96 and up to $539.95 and more (depending on the package and equipment) DIY wireless alarm system that is shipped to consumers directly.

The system consists of:

The remote contains the SimpliSafe Easy Setup Wizard, a software program that provides animated instructions and allows system customization. The system uses an onboard cellular transmitter for central station monitoring. Subscribers receive text messages as well as other dispatch and notification services, standardly provided by central stations upon receipt of signals from the subscriber’s premises.

Subscribers do not sign annual or multiyear monitoring contracts, but instead are offered month-to-month monitoring at $14.99 per month.

In just a few years, the company has reportedly sold 200,000 systems … quite a success story. SimpliSafe’s website states that CEO and Chief Engineer Chad Laurans relied on his electrical engineering degree from Yale and an MBA from Harvard to design “an advanced home security system.”

The website goes on to state, “With so many people [meaning the alarm industry] making a profit, they need to use sneaky tactics to extract money from you. Their

These audacious statements have drawn the ire of those within the security industry. And while that is enough for serious consternation, what is even more alarming, based on my findings, is that SimpliSafe has been concealing key information from the public with regard to its claims, assertions, systems and service.

Indeed, after inspecting the SimpliSafe equipment components, I identified what I believe are a profusion of irregularities.

The Complete System Is Not NRTL Listed

Let’s first look at the functional brains of the system: the base station.

While the wireless smoke detector and wireless carbon monoxide (CO) detectors are listed and labeled by Intertek, a Nationally Recognized Testing Laboratory (NRTL), and are in accordance with applicable statutory requirements of the National Electrical Code, NFPA 70 and UL standards, none of the other SimpliSafe devices are NRTL listed.

That includes, most importantly, the base station/control panel, which is required to be listed by an NRTL. The system manual references UL 985 and NFPA 72, but the fact that the base station is not listed is astonishingly absent from SimpliSafe’s website and marketing materials.

This means that only some of the system’s components are NRTL listed to UL Standards.

The purpose of independent third-party testing like this is to independently verify safety and reliability of the product to show that it meets universally adopted standards and codes. 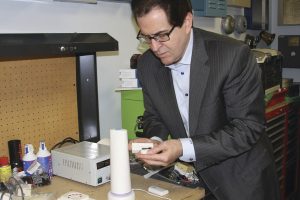 Such testing is required by NFPA 70 for the security and life-safety portions of the system when utilized, and is accepted as a nationally recognized industry standard and best practice.

The system’s base station is packaged together within an approximately 10.5-inch-high plastic lighted hub around the lower portion of its cone-type housing. Components in the system include:

Unlike an alarm control panel that is located in a basement or hidden in a closet, the sleek SimpliSafe base station is designed to be visible in the living area. Thus, it is more susceptible to physical destruction by an intruder, which would render the system nonfunctional and useless.

I was told by a SimpliSafe representative that the consumer, being me in this case, should consider placing a lampshade on top of it for a disguise.

At the same time, in response to questions I had for SimpliSafe, I received an email response and admissions stating in part that, while its base station is not UL Listed, it is tested (by the company itself) to meet UL standards. Importantly, there is no mention of the product meeting the compliance requirements, testing and successful listing mandates of UL 1023 and UL 985.

Therefore the information in the email is false. That is not the equivalent of the proper UL Listing. All of the system’s wireless keypads, sirens, key fobs, door and window transmitters, motion detectors and audio glass-break detectors are also not UL Listed or listed by any NRTL. There are also no tamper switches on any of the wireless transmitters.

So, if an intruder forcibly broke a glass window that only contained a contact, he could simply remove the cover of the transmitter to gain access to its internal battery. The SimpliSafe system would fail instantly.

This SimpliSafe design and equipment does not at all compare to what the professional alarm industry uses, is not “advanced,” and does not comport with nationally recognized industry standards and best practices.

How reliable are SimpliSafe alarms? Turn to the next page.