The World Trade Center attacks on Sept. 11 was not only monumental in terms of U.S. history but also the single most significant catalyst of change for the electronic security industry. For this 10th anniversary observance, high level perspectives are presented from suppliers, integrators, market analysts and others about the indelible impact this tragedy has had on security, and how it continues to shape its future. 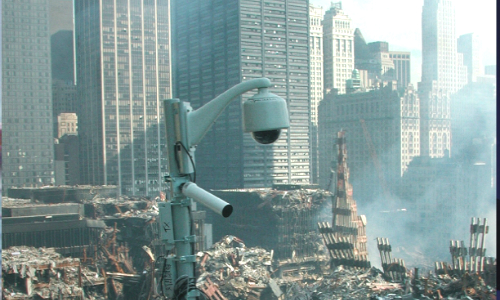 A dome camera stands like a sentry above smoldering debris following the collapse of the World Trade Center towers. For many days after the attacks, wireless, battery-operated pan/tilt/zoom (p/t/z) cameras were set up around the perimeter to monitor Ground Zero. Employees from Pelcos Orangeburg, N.Y., facility, joined by wireless specialists who were taking a training class at the facility, jumped to the call to build the systems in a matter of hours. Courtesy Pelco by Schneider Electric

Through the eerie, smoky haze obscuring Ground Zero and an altered Manhattan skyline on Sept. 11, 2001, change would emerge with mounting force in the coming days, months, years.

Catastrophes and safety breaches of all forms had always provided a rally cry for security and fire/life-safety professionals. With each event there are preventive lessons to be learned and acted upon. Answers are hunted. What could have been done differently to save lives? What actions can be taken to better protect facilities in the future? Will regulations or code revisions be necessary to mandate compliance?

The 9/11 disaster was profoundly different from previous disasters, which collectively help stimulate industry transformation. The scale of the attacks and the resulting effects on the American psyche created widespread awareness for security measures, practices and systems.

An urgent and unprecedented response from the federal government to secure the homeland hastened the development of some experimental security technologies, while creating new markets for others.

Organizations across the corporate landscape discovered their prior indifference toward security had left them hugely vulnerable, unable to mount even the most rudimentary emergency response. Their efforts to ramp up security measures would eventually create new business models for some integrators, while others languished.

To better understand these and other far-reaching ramifications in the wake of 9/11, SSI spoke with more than a dozen high-level industry professionals. Following are dedicated sections that cover the political, business and technological effects of 9/11 distilled down to the realities, challenges and opportunities of an installing security systems contractor. The effects 9/11 is having on building and fire codes are also explored, plus additional material is available online.

In 2001, Mark Bonatucci’s work as director of secure enterprise advanced solutions for Lockheed Martin included managing 15 employees who worked onsite in support of security systems at the Pentagon. He also supervised a $20 million program to update and field new security systems at all of the United States Army’s larger bases.

The following morning, Bonatucci watched on TV from his office cafeteria in Manassas, Va., as terrorist hijackers flew planes into the World Trade Center towers and the Pentagon. He worked urgently throughout the day to make contact with each of his staffers there; all were accounted for and safe.

On Sept. 12 he received a phone call from a customer. A four-star general, the Army client explained, wanted Bonatucci to fly around the country as part of a task force to survey every storage site for weapons of mass destruction and ensure any necessary safeguarding was fast-tracked.

“That $20 million turned into $35 million overnight,” says Bonatucci, who today serves as a senior vice president for Kratos Public Safety & Security (PSS). “The response was huge.”

And so began the Federal government’s efforts in earnest — unprecedented in dimension and fiscal might — to secure the nation from further aggression. By the end of November 2002, the Department of Homeland Security (DHS) was formed in response to the coordinated attacks on 9/11. New agencies such as the Transportation Security Administration (TSA), along with assorted advisory groups and other services, began to reshape the security industry.

Billions of tax dollars flooded into R&D efforts to create or attempt to perfect security technologies that heretofore were the stuff of science fiction.

Suppliers, systems integrators and other industry stakeholders at once were enlivened by a call to duty, intrigued by new market opportunity and mystified by the pace at which the security ecosystem was being transformed.

Significantly, an avalanche of regulations, standards, laws and technical requirements — many of which relied on an electronic security component — would follow as well. Many security organizations were perplexed by it all.

“This created all sorts of issues for security practitioners who now all of a sudden were in the middle of a highly regulated industry and few business people or suppliers knew it,” says Bob Hayes, managing director of the Security Executive Council (SEC), a professional organization of leading senior security executives. “It had to be addressed and it really changed the way we did business.”

In the past 10 years, the work to secure the nation’s critical infrastructure alone has resulted in a bevy of identity verification programs that have helped spawn new market niches for suppliers and integrators.