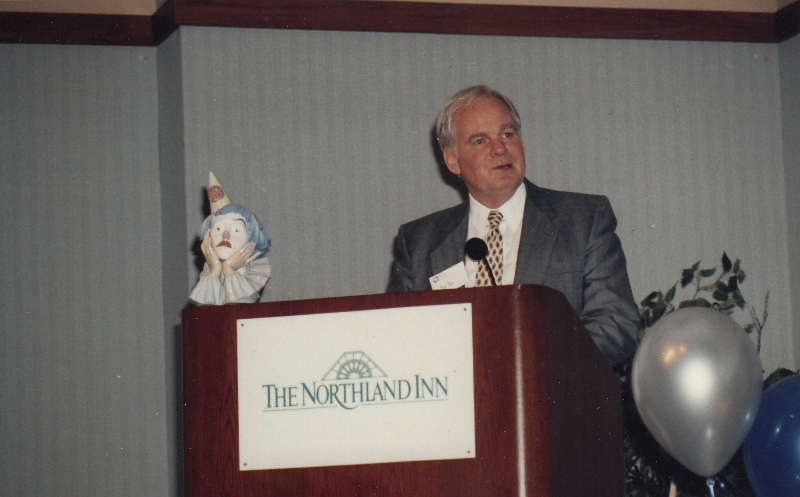 Keys to Success
“I met so many people over the years – dealer/ installers, manufacturers and distributors – and each of them knew something I didn’t know. That truly kept me educated and informed on what this business is about and how it works, or should work. I visited two dealers each day while traveling the country, learning his business and what he/she required from a product manufacturer to help achieve success. Silent Knight’s success can be directly attributed to a unique combination of talented and committed people who enjoyed the challenge of using state-of-the-
art technology to develop a product offering user appeal, installing ease and competitive price.”

Revolutionizing Alarm Monitoring
“One of our major challenges was to penetrate an alarm industry in which the only monitoring option was using dedicated/leased lines. Silent Knight was the only company offering an alternative to dedicated lines, with a solid-state ‘digital communicator’ that provided alarm monitoring on the regular telephone system. Achieving acceptance of the dialing system by traditional central station alarm companies was a major hurdle. The early adopters of our system were the more advanced marketing dealers who recognized the opportunity to successfully compete with the traditional central station companies with the more expensive leased-line systems.”

Inspired Innovation
“Setting Silent Knight apart from our competition was being a technology leader and utilizing the latest technology in our product offerings. Among new innovations introduced by Silent Knight was the touchpad to replace the mechanical key-switch, combination control-communicator, integrated siren/driver and multiple user arm/disarm combinations to identify who arms/disarms. Other developments included the line-cut monitor to detect a cut or defective telephone line, as well as the first ASIC [application specific integrated circuit] in dialing and communications systems. This greatly reduced costs and increased reliability of our products.”

Explosive Growth, Almost Literally
“Silent Knight had just negotiated a private label arrangement to produce digital communicators and receivers for Ademco. Leo Guthart [Ademco president] and Nate Verger [Ademco founder] traveled to the Silent Knight manufacturing facility, our subcontractor in Red Wing, Minn. They wanted assurance our manufacturing met their standards. We toured the facility without incident and all appeared favorable. However, unknown to our visitors, as well as myself, there was a backroom full of gunpowder and shotgun shell loading devices. Our subcontractor was an avid skeet shooter, and the building was basically an antiquated tinder box.”

A Change Is Gonna Come
“The rate of progress and change is accelerating, challenging all the players to keep pace. For some years now, we’ve observed nontraditional entrants in the installation business; mostly by large companies. The competition is growing. A major challenge is to meet the demands of this fast-changing market, in terms of products as well as marketing and services. This requires a close working relationship with customers and fast response to opportunities as soon as they’re recognized. While I expect to see product technology development continue, I believe we’ll see even greater change in business models and marketing.”

Continue to the next page for a profile of George Weinstock…