Jim Boyce’s retirement will see Jeff Likosar take over as chief financial officer and president of corporate development, among other changes.

BOCA RATON, Fla. — ADT (NYSE: ADT) announces a number of changes to the company’s executive leadership following the retirement of Jim Boyce, president and chief business development officer. Boyce plans to retire as of May 31, 2021.

ADT is grateful for Boyce’s leadership, wisdom, and dedication, and for his many contributions as CEO of Defenders and its successful integration into ADT, the company said in an announcement.

Boyce will work as a consultant and continue to advise the company’s president and CEO Jim DeVries. He joined ADT after the company acquired Defenders, its largest independent dealer, in 2020.

With Boyce’s retirement, Jeff Likosar has been named chief financial officer and president of corporate development, and will assume responsibility for corporate strategy, business development, partnerships, and communications, in addition to his current responsibilities as CFO. Supporting Likosar will be company veteran Ken Porpora, who has been promoted to executive vice president of finance.

“I want to congratulate Jim Boyce on a well-deserved retirement and thank him for being a trusted friend and partner for many years,” says ADT’s president and CEO Jim DeVries. “With Jim’s upcoming departure and our renewed focus on growth, we’ve realigned and enhanced our team, ensuring we’re building a strong leadership group that will serve ADT well into the future.”

ADT also made Keith Holmes its executive vice president and chief revenue officer. He will begin reporting directly to DeVries later this month. Holmes comes to ADT from Cox Communications, Inc., where he served most recently as the executive vice president, head of Cox Business. At ADT, Holmes will lead go-to-market activities and teams, including marketing, sales execution, offer development and pricing.

ADT also added a new hire in Jill Greer. Greer will act as the company’s senior vice president of finance, investor relations and communications, and will report to Jeff Likosar. Greer comes to ADT after a long career with Delta Air Lines, where she served as its vice president of investor relations, according to the company.
Tagged with: New Hires ADT Business News People 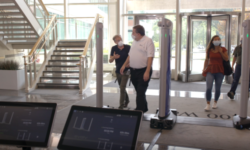