Researchers were able to train the artificial intelligence to detect guns in real time with nearly 97% accuracy. 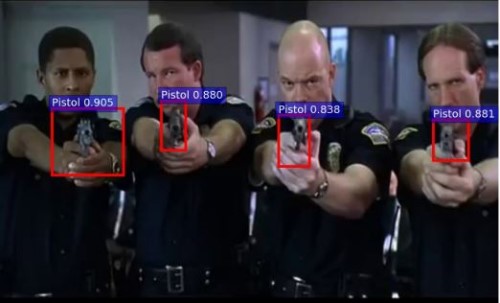 GRANADA, Spain — Researchers at the University of Granada (UGR) have designed a computer algorithm that can identify guns on video in real time.

The researchers trained the artificial intelligence on low-quality videos from YouTube and movies from the 90s, such as Pulp Fiction, Mission Impossible and James Bond.

The algorithm showed an effectiveness of over 96.5%,  detecting guns with high precision by analyzing 5 frames per second, or in real time.

When a handgun appears in the image, the system sends an alert in the form of a red box on the screen where the gun is located.

UGR professor Francisco Herrera says the artificial intelligence can be easily combined with an alarm system and implemented inexpensively using video cameras and a computer with moderately high capacities.

He also says the system can be implemented in any area where video cameras can be placed, indoors or outdoors, and does not require direct human supervision.

Security professionals will want to keep an eye out on this emerging technology as the need for improved security at locations like airports, schools and hospitals continues to increase.

While it may not be able to completely replace current detection methods such as metal detectors, there is no doubt the algorithm can serve as a supplemental component to a larger solution.

The researchers also note that at this time, no published scientific study, patent or commercial product has dealt with the issue of gun detection in videos in real time using “deep learning”, which makes this a completely pioneer study on a global scale.

Here is the abstract from the official research paper:

Current surveillance and control systems still require human supervision and intervention. This work presents a novel automatic handgun detection system in videos appropriate for both, surveillance and control purposes. We reformulate this detection problem into the problem of minimizing false positives and solve it by building the key training data-set guided by the results of a deep Convolutional Neural Networks (CNN) classifier, then assessing the best classification model under two approaches, the sliding window approach and region proposal approach.

The most promising results are obtained by Faster R-CNN based model trained on our new database. The best detector show a high potential even in low quality YouTube videos and provides satisfactory results as automatic alarm system. Among 30 scenes, it successfully activates the alarm after five successive true positives in less than 0.2 seconds, in 27 scenes. We also define a new metric, Alarm Activation per Interval (AApI), to assess the performance of a detection model as an automatic detection system in videos.

You can read the full paper here.