Families in N.C. Push for CO Alarms in Every Hotel Room

CHARLOTTE, N.C. – A year after three people died of carbon monoxide (CO) poisoning in a Boone, N.C., hotel room, their families support proposals before the N.C. General Assembly to require alarms in parts of hotels and other lodging establishments, the Charlotte Observer reports.

But they don’t believe the provisions go far enough. They want a CO alarm in every guest room.

“Just like smoke alarms are in every room,” Jeannie Williams of Rock Hill told the newspaper.

Her 11-year-old son, Jeffrey, died of CO poisoning last year in room 225 at the Best Western in Boone. Jeannie Williams suffered serious injuries. Since then, she takes a CO alarm with her whenever she travels unless the hotel room is equipped with one, according to the newspaper.

After Jeffrey died, the public discovered he wasn’t the first person poisoned by CO in Room 225. Nearly two months earlier, Daryl and Shirley Jenkins of Longview, Wash., were found dead in the same room, the newspaper reports.

The Jenkinses’ daughter, Kris Hauschildt, said lawmakers should ask themselves: “If they had the choice between staying in a hotel room with a carbon monoxide detector and one without, which would they choose? They are making decisions for the safety of all of us—- their families included.”

Lawmakers enacted a requirement, effective Oct. 1, 2013, that hotels and other lodging establishments install CO detectors in every enclosed space with a fossil-fuel-burning heater, appliance or fireplace and in every room that shares a wall, floor or ceiling with such spaces, according to the newspaper.

Since the new requirement took effect, 44 of 102 hotels inspected in Mecklenburg County have been found to be in violation. Businesses have 30 days to put in alarms, which can cost less than $75.

This year, legislators want to broaden and clarify the law.

Under the new provisions, carbon monoxide alarms, not just detectors, would be required near heaters, appliances and fireplaces that burn combustion fuels. The requirement would apply to extended-stay tourist homes, bed-and-breakfast properties, as well as hotels and other lodgings.

The most significant change would put fire departments in charge of enforcing the law, rather than health departments.

Different versions of the new proposals have passed both legislative chambers. A final version is expected to be signed into law by Gov. Pat McCrory. 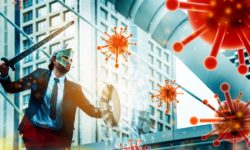 Why Security Is Vital Vs. Coronavirus