The implementation of video doorbells has been on the rise in recent years. It’s probably fair to say this can at least partially be attributed to the popularity of Ring.

Ring quickly rose to the top of consumer smart doorbell brands and is now owned by e-commerce goliath Amazon after being purchased for more than $1 billion last year.

Last year Ring also launched Neighbors, which is essentially a neighborhood watch app that allows residents to post doorbell footage and interact with each other.

Police departments and law enforcement services can also sign up to share their own data through the platform. However, this isn’t where Ring’s relationship with law enforcement ends.

According to a report from Motherboard, Ring has essentially enlisted police departments as salespeople for its video doorbells.

A secret agreement obtained by Motherboard shows a local police department agreed to advertise Ring video doorbells in exchange for free Ring products and a Law Enforcement Neighborhood Portal that allows police to request footage from these cameras. From Motherboard’s report:

Dozens of police departments around the country have partnered with Ring, but until now, the exact terms of these partnerships have remained unknown. A signed memorandum of understanding between Ring and the police department of Lakeland, Florida, and emails obtained via a public records request, show that Ring is using local police as a de facto advertising firm. Police are contractually required to “Engage the Lakeland community with outreach efforts on the platform to encourage adoption of the platform/app.”

While an increased number of surveillance cameras and a larger data pool for police to dig through —as well as the ability for residents to obtain these video doorbells for free — may seem like a good idea, the fact that Ring is secretly using law enforcement as a sales tool raises ethical concerns. 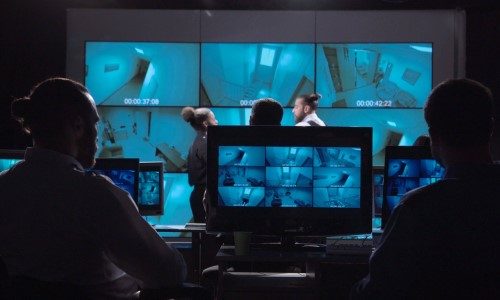 Related: Do Ring Employees Have Access to Customer Surveillance Feeds?

“When really powerful companies, or police for that matter, are incentivized to find crime, they’re going to find it no matter what,” Chris Gilliard, a professor of English at Macomb Community College who studies digital redlining and discriminatory practices told Motherboard. “It’ll ultimately shift the definition of what is a crime and lead to over-policing in some ways. Frankly, [it’s] the broken windows style that tends to harm marginalized communities more.”

Ring donated 15 free doorbell surveillance cameras to the Lakeland Police Department, and created a program to encourage people to download its Neighbors app.

For every Lakeland resident that downloads Neighbors as a result of the partnership, the Lakeland Police Department gets credit toward more free Ring cameras for residents, according to the documents.

Ring told Motherboard that these positions weren’t required, but an email from a Ring employee to local police says that Ring would “need” the positions filled.

“Involvement by each of these groups is essential for active community participation (specifically on video requests) and overall long-term success of the partnership,” Ring’s “Law Enforcement Liaison/Territory Manager” said in an email to Lakeland Police Department officers.

The emails obtained by Motherboard also reference the organization of two training sessions, which were led by Ring. According to the emails, the first training session was a Law Enforcement Neighborhood Portal webinar, to be attended by only the five people with Ring-specific roles. The second training session was in-person and involved a Ring representative coming to the Lakeland Police Department headquarters and speaking to all police officers.

Ring has partnered with at least 200 law enforcement agencies around the country, though it is unclear how many have signed similar agreements. You can view the documents obtained by Motherboard, here. The report (linked above) includes much more, including the implications of a “private surveillance network.”