The vehicle is designed to carry a payload of standard video cameras, and available optional gas and chemical sensors that can be used to observe changing situations from within the safety of a security command Center.

The vehicle is equipped with a siren, flashing lights and voice announcements, including two-way communications, to help detect vandalism, trespassing, theft and other dangers, such as potentially identifying pipeline cracks or gas leaks.

The Sharp INTELLOS A-UGV is a cost-effective, multiterrain, mobile sensor platform that can capture video, audio and environmental data, while providing a visible deterrent, according to the company. The data it provides can enhance outdoor surveillance, security, safety and maintenance inspections, which will help organizations meet the challenges of an everâ€changing security landscape by augmenting a skilled guard force.

READ NEXT: Why Robotics Are Destined for an Array of Security Applications

Sharp INTELLOS is a type of robotics system in the category called Automated Unmanned Ground Vehicle (A-UGV). Unlike existing remote control robots that require a trained, human operator, an A-UGV is essentially a self-directed robot, which navigates on the ground without a human driver. After its route is programmed, it is capable of operating outdoors around a facility and can be equipped to extend human capabilities, such as sight, using an array of cameras, which include optional thermal imaging.

Though it can provide virtual, autonomous operation for up to three touring shifts daily, the Aâ€UGV can also be overridden by the operator in a command center and used as a semi-autonomous vehicle when more direct control is required.

Among its key features:

The A-UGV utilizes a navigation surveillance platform developed by Sharp.

“The INTELLOS A-UGV is rooted in Sharp’s 100-plus years of manufacturing excellence and a legacy of engineering world technological ‘firsts’. Like our document systems and professional displays for which we are known, the Sharp INTELLOS A-UGV is another solution for today’s businesses,” says Doug Albregts, president, CEO and chairman of SEC. “When it comes to the shifting demands of private and public sector security, the industry integrators and their customers will now have a safe, reliable and cost-effective robotic tool working to safeguard people, assets and infrastructure.”

The automated guarding system can be integrated with any site’s current security infrastructure to add additional layers of monitoring and detection capabilities, according to the company. Sensor and two-way communication data can go back to a command center in real-time allowing detection of incidents as they occur, as well as, recorded for future viewing.

Sharp says its A-UGV is well suited for large, expansive outdoor properties such as:

Sharp says it will continue to run customer trials and share case study findings. Channel partners and systems integrators are have begun taking orders now; units are targeted for shipment by the beginning of 2017.

According to David Antar, president of IPVideo Corp., the Sharp INTELLOS A-UGV is what the security industry has been waiting for.

“The Sharp A-UGV fills the gap that has existed in true situational awareness and real-time data collection for customers in search of comprehensive surveillance. During my nearly 30 years in the industry, rarely have I been this excited about a new product launch,” he says.

To find out more and express sales interest, visit SharpINTELLOS.com. To foster awareness and understanding about UGVs for security, visit Robolliance.com. 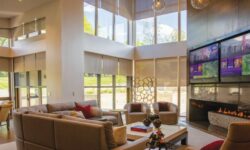