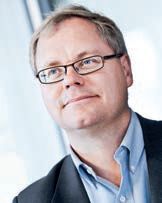 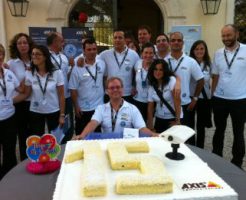 “I have always been very curious and loved new products and gadgets. And what I like more than buying them is developing them. This probably goes back to when I was a child and could not afford to buy the few gadgets available. Simply, if I wanted them, I had to build them on my own. This is something I still do. Axis is now a large, global company with more than 1,600 employees and 65,000 partners. One of our main challenges today is ensuring that we keep the company innovative and agile as we grow. This is why we continue to invest so heavily in R&D and hire global employees who exemplify our core values: Act as one, always open and think big.”

“Axis was not an IP video company from the beginning – and still is not. We are more an IT company with the business of connecting intelligent devices to the network. We began by doing this with printers and here some of my mentors were my other co-founders, Mikael Karlsson and Keith Bloodworth. Keith formalized the Axis business model of never bypassing the channel, and Mikael provided a lot of vision and ideas on how to manage and grow a company.”

Introducing IP Into an Analog World

“The first time we exhibited at a tradeshow was IFSEC in Birmingham [U.K.] in 1997. Everyone thought we did some kind of toy camera and had gone to the wrong tradeshow. We, on the other hand, realized the whole market was analog and would go IP one day. This was around the same time we decided to invest in our first video application-specific integrated circuit [ASIC], otherwise known as ARTPEC-1. This specially designed ARTPEC chip from Axis made the network camera suitable for video surveillance. Today, we’re on our fifth generation of ARTPEC and it continues to be a major differentiator.”

Gren began his career in high school selling control equipment for disco lights. The business grew and enabled him to employ many of his classmates. One guy purchased components, another bent plates and helped him with cabling, and his little sister even etched the PCBs. But most of his classmate “employees” were resellers. Gren says this was where he learned the importance of treating all partners equally. “Business was done a little differently in the schoolyard. If one classmate got a better price than another one, they would simply beat me up!”

“One of the biggest changes has been in how electronic security equipment has been procured. Historically, it was purchased from a single vendor offering the whole system, which resulted in higher prices and not so efficient distribution. Today, we see more efficient distribution of security products as the modern distributors are more efficient than buying everything at once. Looking ahead, we still see challenges in getting the low camera count market to switch to IP, but here we now see them switching too.”