The DITEK DTK-MRJEXTS is a point-of-use surge protector compatible with CAT5e, CAT6 and CAT6A cabling infrastructure. 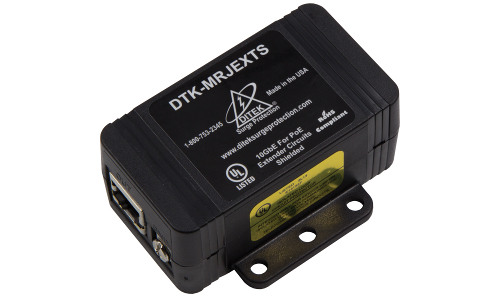 LARGO, Fla. —  DITEK announces the launch of the DTK- MRJEXTS surge protector, designed to be installed on the outputs of PoE Extender devices.

The DTK-MRJEXTS is a point-of-use surge protector compatible with CAT5e, CAT6 and CAT6A cabling infrastructure, and when used with STP cabling, the DTK-MRJEXTS does not require a separate earth ground, according to the company.

DITEK says the device is designed to handle data speeds up to 10GbE without signal degradation and is ready for high-wattage applications with PoE+ and Hi-PoE.

“The advanced circuitry in the DTK-MRJEXTS provides protection for PoE extender circuits,” says Jason Klein, national sales manager, DITEK. “In the event of a power surge, installing this product will ensure your PoE extender devices are not damaged or destroyed and your system will maintain operational.”

It contains shielded RJ45 connections with an external grounding screw and complies with IEEE standards 802.3af and 802.3at for PoE. It can also operate in temperatures from 40°F to 158°F and comes with a 10-year warranty.

“For businesses that make use of PoE extenders for critical systems such as access control or video surveillance, ensuring that those systems do not experience downtime due to a surge event is essential,” explains Klein. “Surges can spread easily across a PoE network, so protecting your devices helps to protect the entire organization.”