The Elgato Stream Deck controllers may primarily be for video game streaming, but they have the potential to be an invaluable differentiator for integrators. 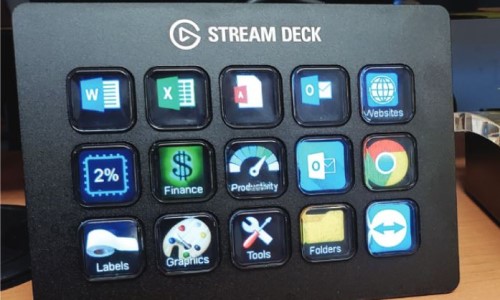 We are always on the lookout for crossover products — hardware or software designed for one industry that works well in another.

Sometimes the impetus is to solve a specific problem in an area that is not well served by traditional security equipment manufacturers and developers. At other times we may run across a solution in search of a problem, partly driven by a love of gadgets.

The Elgato Stream Deck and Stream Deck Mini controllers sit squarely at the intersection of these two areas, and we think it’s likely you’ll come up with applications of your own after taking a closer look.

The Stream Deck is designed for streamers, people who stream video games live for an audience across a variety of Internet platforms, the most popular of which is Amazon’s subsidiary, Twitch. 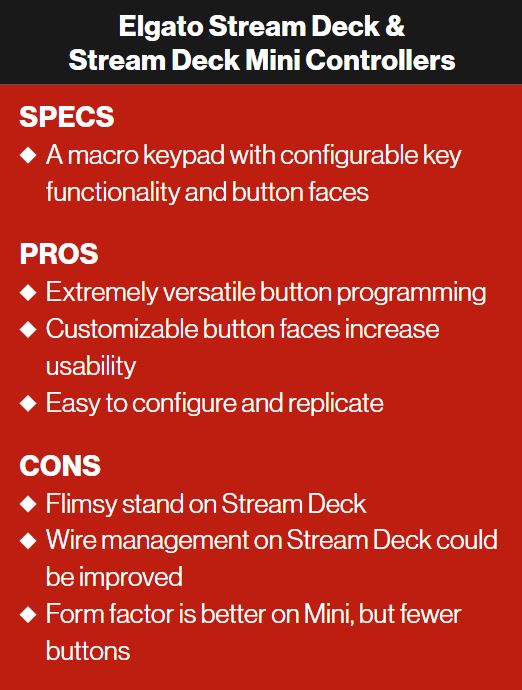 It is essentially a macro keypad that, when combined with the included software, allows you to program buttons for a wide variety of functions.

The Stream Deck has 15 buttons, while the Stream Deck Mini has six, but they are essentially the same with some construction differences as outlined below.

The Stream Deck is a flat rectangular box measuring 4.6 inches wide by 3.3 inches tall by 0.8 inch thick, if stood up. It has five buttons across the wider dimension, and there are three such rows, for a total of 15 buttons.

Each button is roughly the same size as a standard computer keyboard keycap. The front panel appears to be aluminum, with the case a sturdy injection molded plastic.

There are non-skid feet on the bottom of the unit, and the USB cable which both powers and connects the Stream Deck to your computer comes out the top.

If you want to use the unit flat on a desk or table, fine. It’s light (6.4 ounces), but downward pressure on the keys won’t cause the unit to move around.

If you want to use the Stream Deck at an angle, it becomes a little more problematic. The unit ships with a flimsy, foldable stand that will prop it up at a variety of angles, but it is really not built for commercial use.

I cut a piece of wood, painted it black, put a piece of rubber on the bottom and used Velcro to affix the Stream Deck to it with great results. 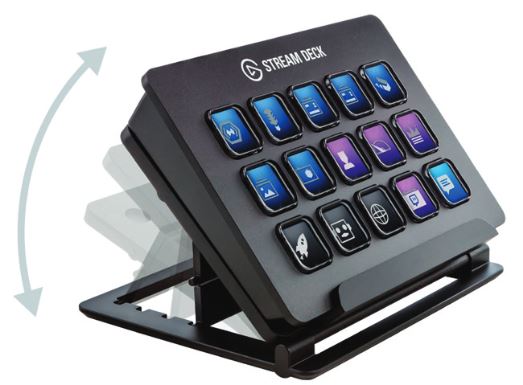 The controller ships with a foldable stand that will prop it up at a variety of angles.

However, it could just as easily be mounted (using Velcro or double-sided tape) to something else on the desk or console to put it at the correct angle.

The Stream Deck Mini is a newer iteration of the product with fewer buttons (six, in two rows of three) and a better form factor. It has an angled design that is a more optimal angle, weighs about the same and measures 2.4 inches X 2.3 inches X 3.3 inches.

The USB cable comes out the bottom rather than the top, which makes it easier for cable management, but otherwise the keys, functionality, and software are the same.

Hereafter, when we say Stream Deck we are talking about both products. While there are a lot of keyboards that support macros, and there are utilities for programming key functions on standard computer keyboards, what sets the Stream Deck apart is that each key has a full color OLED display behind it with 72 X 72 pixel resolution.

The keys themselves require enough physical force to activate that you won’t brush them and trigger them accidently, and they are solidly assembled, with positive (if rubbery) feedback when they bottom out.

Streak Deck’s manufacturer, Elgato, was recently purchased by PC peripheral maker Corsair. That company has a good track record for making durable products that stand up under heavy usage, which bodes well for commercial applications. 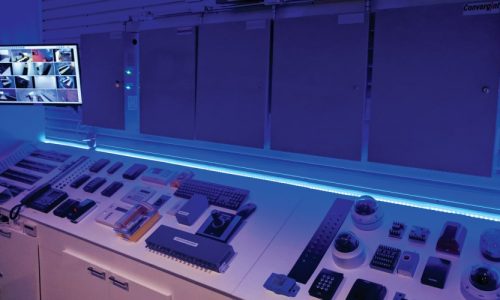 While the configurable keys are the main functionality driver of the Stream Deck, the fact that they can be identified with full color images, graphics and text is what makes this product shine.

Keys can be configured to launch programs, press hot keys, execute macros and even embed text (e.g. insert a standard line of text in a security report). A key can launch a submenu, and submenus can be nested so there’s really no practical limit to the number of keys that can be used.

Key functionality is grouped into “profiles,” and you can have as many profiles as you want. Profiles can be activated by software you are running, and a key in one profiler can call another profile as well.

For example, in our media lab we have a workstation used for graphics, digital audio and video editing. The main page (top level of the default profile) on the Stream Deck in that room has keys for common programs (Word, Outlook, Excel), and keys that access folders for graphics programs, audio programs, utilities and common file folders.

If you press the audio directory key and then press the “Sound Forge” key, Stream Deck loads the Sound Forge profile with keys (transport controls, editing markers, etc.) unique to that program. 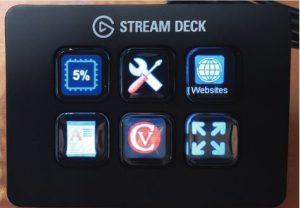 Adding graphics to the buttons makes them more intuitive and far simpler to use than keyboard commands.

The Stream Deck software package has proven to be extremely bulletproof in our use, and we are currently running three of these controllers.

Features have been added, but the user interface has stayed the same throughout the different software revisions we have tried. Configuration of keys is largely drag and drop. Images can be created in any program and the software will do some scaling, so they don’t have to be exactly 72 X 72.

There’s also a link to a free web-based button creator that can be used to create icons, and you can select from a limited variety of fonts, sizes and colors for text.

If all of this sounds like a time sinkhole for a hobbyist and not an integrator, you’re both right and wrong. Profiles can be exported and imported, so if you take the time to create a standardized deployment, you can roll it out pretty easily.

Further, the profile formats are compatible, so you can export a profile from the Stream Deck to the Mini, but you’ll only see the first three buttons from rows one and two. 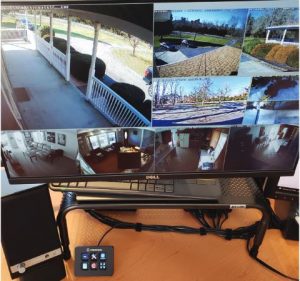 The Stream Deck Mini enables a full-screen VMS by moving the buttons off the screen.

Our initial use case for Stream Deck was to eliminate the keyboard from a CCTV workstation, relying only on the mouse, a touchscreen, a fingerprint reader (for logging on and off ) and the Stream Deck.

In conjunction with eliminating icons and shortcuts from the desktop and Start menu, we thought this would present a more secure environment for certain applications (i.e. reception desks) while maintaining ease of use.

We set up a Mini with Salient CompleteView software. The six buttons include a readout of CPU usage, a tools menu, a website menu, WordPad, the CompleteView client (it autoloaded, but we thought a button to restart it would be handy) and a button to expand the client to full screen.

This last button is what led us to using the Stream Deck, as that function was only available from the F11 key and therefore couldn’t be accessed via the touchscreen.

The tools submenu drilled us down into an “exit” icon (control+F4), an icon to shut down the workstation, one to run TeamViewer for allowing diagnostic access, and a few others.

Running the Mini on our CCTV workstation and Stream Decks on two other computers, we did our best to simulate heavy usage with no ill effects. 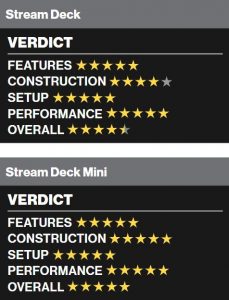 We had no way to test for the lifespan of the OLED screens, but you can program screen brightness (even adding it to a button) and a screen “sleep” timer ranging from five minutes to two hours of inactivity if this is a concern.

While this may be a product in search of an application, the Stream Deck worked well in our specific use case and has proven invaluable in the other locations where we have tried it.

Adding something like this to a project is certainly a differentiator for an integrator, particularly if you like to tinker. And the best part: the Stream Deck sells for about $150 online, while the Mini is about $100. For that price, you may want to pick up one or two and see what uses you can come up with for it.