Growth Projected for Pelco After Acquisition by Schneider Electric

CLOVIS, Calif. — In the wake of French corporate giant Schneider Electric announcing its acquisition of privately held Pelco, officials from both companies say they expect the Clovis, Calif.-based security camera manufacturer to expand after the deal is completed in October. Schneider Electric, a global electrical and building automation conglomerate that makes a wide range of electrical products, announced Aug. 1 in Paris that it would acquire Pelco for $1.54 billion.

Under the new ownership, Pelco will operate within Schneider’s Building Automation Business Unit, TAC, which is headquartered in Malmo, Sweden. Pelco will continue to operate autonomously and will be in charge of TAC’s Fire and Security Product Division, Arne Frank, TAC’s chairman and CEO, tells SSI.

Schneider, which bases its U.S. operations out of Palatine, Ill., operates in 190 countries and enjoys wide success in installing robust solutions that center on a common IP backbone for much of the control systems in a client’s building. More and more, Frank explains, customers want video surveillance to be integrated with access control and other systems.

“Pelco has recently launched a number of very impressive products and has very promising R&D activity. With the combination of our international presence we expect to further propel Pelco’s very impressive growth,” he says. Pelco President and CEO David McDonald, who is reportedly selling his minority interest in the company, is to remain in charge of Pelco.

“We will continue to focus on the enterprise side of the business. Building systems and then solutions, trying to drive this open systems approach to the market with third party software and hardware players in the access control and video analytics areas,” says Scott Schafer, Pelco’s senior vice president, marketing and North America sales. “I think we just move faster in those zones than maybe we would have before.”

Pelco has 2,200 employees in Clovis and 2,600 worldwide. According to Schafer, all employees will remain with the company. Significantly, he adds, Pelco will continue to maintain its “100-percent channel model,” despite Schneider’s existing installation arms.

“We are committed to our channel partners — from the largest on the planet to the smallest. We expect to stay with that. Pelco is not changing its channel strategy at all,” he says. 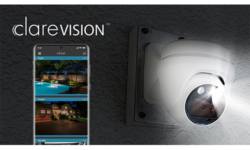