In addition to the 12MP Super Fisheye, the new IDIS NDAA lineup includes a growing list of network cameras and recorders. 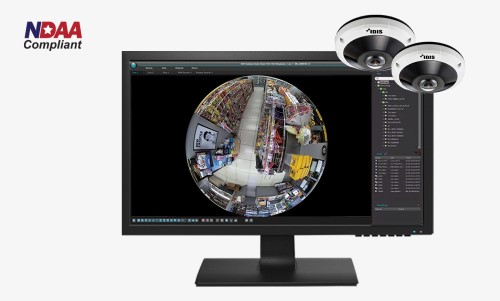 The 12MP IR Super Fisheye features Smart UX Controls, which enable smooth and intuitive panning, tracking, and zooming with ease and accuracy, according to the company.

These controls allow operators to follow moving objects or suspects in real-time and dewarp any point of interest in six view modes directly from the camera, VMS or via IDIS mobile apps on smartphones or tablets.

“Meeting NDDA compliance and global regulations and standards is a concern for systems integrators and end users worldwide,” says Andrew Myung, president, IDIS America. “We are now shipping an extensive Korean-made range of powerful cameras and recorders that are NDDA-compliant, inherently cybersecure, and come with built-in failover. Together with a choice of video management software and our 98% accurate deep-learning powered analytics, we are giving customers the assurance and trust they need, while ensuring an industry-beating low total cost of ownership.”

On-board analytics include active tampering alert, trip-zone alert and heat mapping tools. The camera can also be utilized by IDIS Deep Learning Analytics, allowing users to benefit from object, loitering and intrusion detection, as well as metadata and appearance searching.

Fully cybersecure, this camera is equipped with multilayered encryptions and proprietary-protocols and gives users the assurance of continuous seamless recording with IDIS Smart Failover, the company says. The 12MP Fisheye’s wide dynamic range (WDR) capability is said to cover a wider area even in varying lighting conditions, maintaining image brightness, exposure and contrast to provide forensic-level detail right to the periphery.

In addition to the 12MP Super Fisheye, the new IDIS NDAA lineup includes a growing choice of network cameras and recorders for applications of any size.

In 2019, the National Defense Authorization Act (NDAA) was signed into law, banning United States government agencies from purchasing video surveillance products and other telecommunications gear that use components manufactured by a specific list of Chinese firms.