Video cameras and especially video doorbells have been one of the fastest-growing security-related products sold into the home in recent years. Find out about the latest features and opportunities in this area from those who know best. 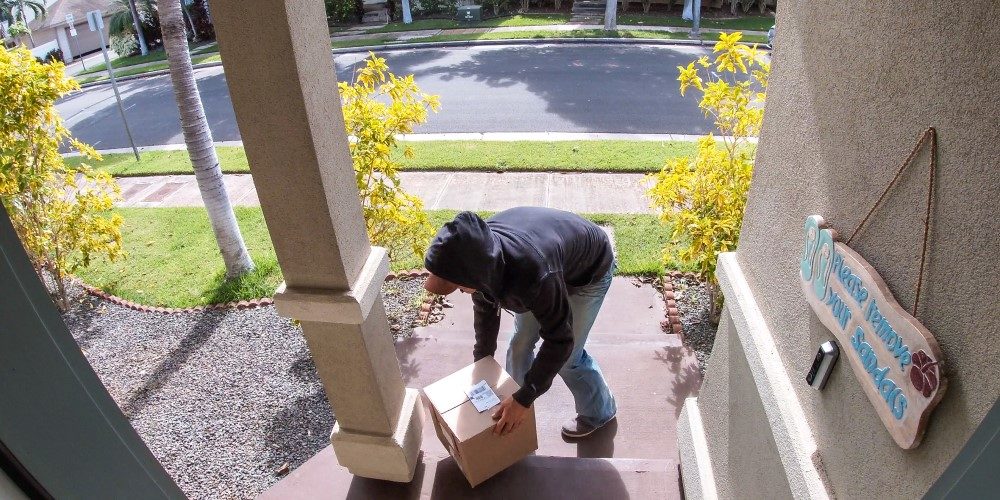 The residential video surveillance market has transformed substantially over the years. We now have product categories that didn’t even exist a decade ago. The industry has evolved from installing hardwired cameras delivering black-and-white feeds to wireless cameras delivering high-definition video in low light that can be accessed anywhere in the world via smartphone.

Smart home products such as WiFi cameras, and especially video doorbells, have blown the doors open for security integrators to swoop in and offer affordable, quality security and surveillance solutions.

Numerous studies have shown that smart home products are a gateway to security services. Research from The NPD Group shows security cameras are the most popular type of smart home device, being owned by 15% of consumers. On the flipside, that means there’s a whole 85% waiting to hear from you.

Thanks to the ongoing COVID-19 pandemic, consumers are spending more time in their homes than ever before. In fact, a survey by Hippo Insurance reveals that 42% of American homeowners indicated they will spend more time at home compared to last year, even when economies reopen following the pandemic. 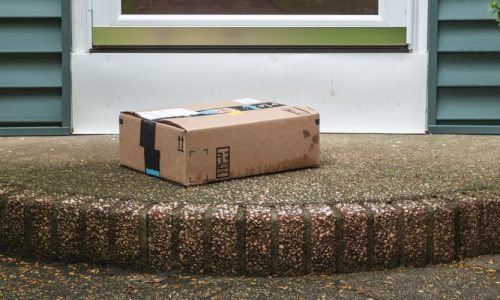 Related: 1 Out of 4 Package Theft Victims End Up Buying a Video Doorbell

Now is the perfect time to sell your surveillance wares and give homeowners some peace of mind. Let’s dive into the latest technology and opportunities in the residential video surveillance space.

Keeping Up With Customer Expectations

As technology evolves so do consumer expectations. Five years ago, you might install a camera, show a customer how to view a recording and they’d be happy. These days, many customers want all the bells and whistles. They want to know how to access their video feed from different devices so they know what is going on in real-time, how to integrate the cameras with their security system and share video with others.

“It’s an interesting transformation,” says Allison Beach, managing director of research and development, Alarm.com. “You can see how the security system now complements the video, the video complements the overall system and you can get this cohesive idea of what’s going on in someone’s home.”

Cost has also dropped substantially, making cameras more affordable for residential customers. These solutions are also easier for integrators to install. LOUD Security General Manager Eric Widner says that integrators used to walk into a home and get nervous when it came time to talk about cameras because the cost was likely out of reach of virtually every homeowner.

“We would walk in knowing that we were about to present the homeowner with a cost of anywhere from $600 to $1,000 per camera at the end of the day. By the time you include figuring out how to run a wire, the damage it might do to a house or its structure as you exit, or as you retrofit those wires in and the labor that it would take to install those, the cost of video was always just too expensive and out of reach for most people,” he explains. “And then you also have to get a DVR or a recording device in there and be able to get all the wiring to that point. If you managed to get all of that to happen, you still didn’t have any type of remote access where you could see the video on demand except on the most expensive systems.”

What formerly required a lineup of expensive equipment can now be accomplished with a single camera and smartphone. 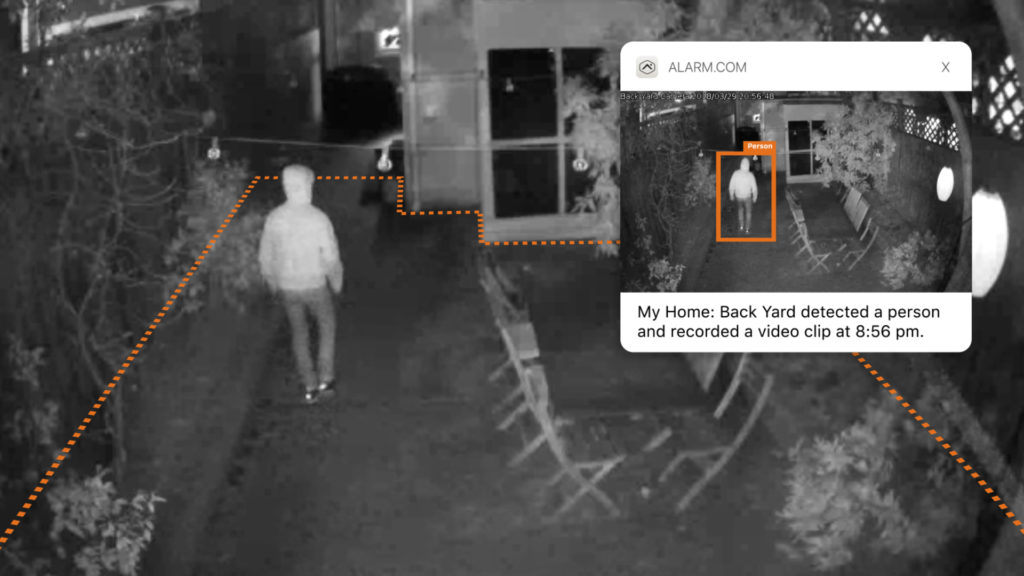 The Alarm.com platform can monitor video streams in real-time and alert property owners about important events.

As home deliveries become more prevalent, especially during the pandemic, homeowners are concerned about package thieves. Cameras — video doorbells especially — make for an attractive offering. One could even argue that the single product that has helped usher in this new era of residential video more than any other is the video doorbell.

Ring, one of the first major providers of video doorbells, has become synonymous with the category. Ring saw such great success with its DIY-oriented business it launched its Ring X line specifically for integrators earlier this year. The line features a longer three-year warranty (compared to one year on DIY Ring products), heavy-duty metal faceplates, higher price points and the Ring Protect Lifetime Basic Plan streaming/recording service included in the purchase of the product.

Now nearly every video surveillance manufacturer has its own video doorbell. From Napco to Hikvision, to DMP and Nortek. And if they don’t have their own video doorbell, they almost certainly ensure their products integrate with one.

Not only are video doorbells an easy way to get the attention of potential customers, they are also an excellent way to open the door to more video sales, according to Napco Senior Vice President of Sales Dave Sheffey.

“The use of the doorbell drives video sales in general because it allows people to get their feet wet with a video product that’s very easy to use and that goes on the exterior. Once they start using that product, they realize they have other video needs.”

Sheffey adds that the video doorbell itself can also be an effective word-of-mouth marketing tool. With a security system, the user basically either turns it on and off. A video doorbell, however, can easily be shown off.

“It’s the fact that people show other people. You happen to be standing in a group of people and somebody comes up to your door and your doorbell goes off. You’re showing everybody [the video] and the next thing you know, three of those people that were standing next to you run out and buy a video doorbell,” he says.

Of course, these days one may argue that a product is only as good as the RMR it can offer. By utilizing an integrated platform, integrators have total control over the products they sell by being able to attach a monthly fee. However, that is not the only way to obtain RMR.

“We’ve actually been finding our own way into the recurring revenue field with more traditional CCTV cameras as well, where we have some lease to own packages that also contain an annual service agreement,” says Widner. “So what we do is we actually have built in a trip to the customer every year to get out there, clean the cameras, adjust the cameras, test the cameras, make sure the customer knows if there are any new obstructions.”

LOUD Security also utilizes backend software such as OpenEye’s Cloud platform to manage camera systems automatically and send a monthly report to the customer. If the integrator gets a report that a camera has gone to black, it will let the customer know that they may need a service call to get somebody out there if it can’t be fixed remotely.

Lancaster, Pa.-based Select Security does a lot of business in high-end homes. CEO Patrick Egan, an SSI Hall of Famer, says he is seeing video requested more often than not residentially, with more than half of the company’s residential sales across its 21 branches including a video component. Each system also includes a maintenance contract. 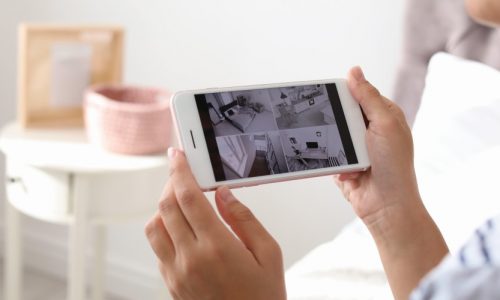 “It could be as small as a video doorbell or one or two interior or exterior cameras, or it could be a full blown eight-, 10-, 12-, 14-, 16-camera system,” he explains. “On the high-end side, we are seeing automation and gate control, video intercom at the gate, two-way audio. They all want the apps. They all want to be able to look in at any time. They want 30-day recording.”

Egan, who is also the president and CEO of monitoring provider Security Partners, is additionally seeing video verification increase in popularity because it gives the homeowner a comfort level they did not have before. Not to mention for first responders that now have an idea of what they are getting themselves into compared to a non-video verified alarm.

One of the most oft-cited reasons end users are hesitant about putting cameras in their homes is the concern over privacy. However, security pros say the desire for convenience is beginning to outweigh those concerns. Cameras integrate with a variety of smart home products. Users can ask their voice assistant to stream their surveillance feed to a TV, or set smart lights to turn on when motion is detected.

New features such as video analytics, which could previously only be found on the most expensive cameras, have now become prevalent on most devices. Users can know exactly what is going on around their home and even have responses automated. Platforms like Alarm.com let users customize the types of notifications they receive and create custom actions. 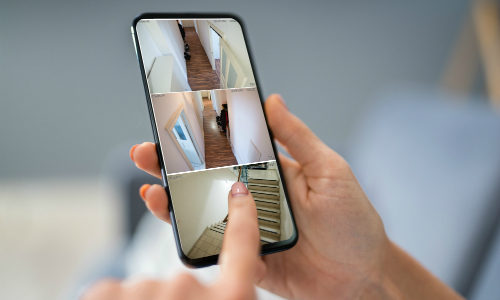 “The video analytics offering is very popular and I think it gives the customer the information they want. Our video analytics include state-of-the-art AI and we can detect and classify people, vehicles and animals,” says Beach. “Beyond that we also offer the user the ability to create advanced rules, so the user can be very specific about the information they want to be notified about. Maybe you want to know if a car pulled into your driveway, but you don’t care if a car is leaving your driveway because that’s you leaving for work, so you don’t need a notification for that. You can create a trip-wire that monitors one direction or the other.”

Between working from home and children home schooling, people are spending much more time in their dwellings as a result of the pandemic. Widner says there’s been a quantum shift in how people feel and what they’re willing to risk to make sure that they’re actually getting things done.

“All of a sudden there’s this significant change and people are willing to give up a little bit of that privacy risk and they’re putting a lot more interior cameras in so they can watch their children, make sure they are doing the schoolwork they need to be doing, not sleeping in and in general getting done what needs to get done throughout the day,” he says.

Just as residential video was picking up steam, the pandemic has seemingly thrust it to full speed ahead. Don’t miss out on this lucrative opportunity. 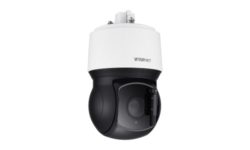 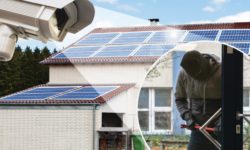 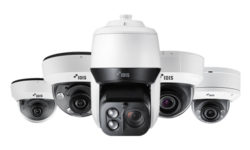