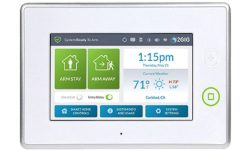 Among Nortek highlights, 2GIG extends its functionality with the new GC3 Panel integration with the ELAN Entertainment and Control Platform.

Dean is a veteran of 33 years in the security industry with 10 years at Honeywell before co-founding 2GIG Technologies in 2008.

The security system leverages 2GIG’s wireless sensor line and is optimized to work with gate and access control systems.

The all-in-one panel lets you control your security and smart home devices, is faster to install and dramatically easier for installers and customers to use.

Did you know that Nortek’s Linear security and home automation group has the only NASA-approved doorsets? Or that it has a crash-test dummy named Fred? I didn’t.