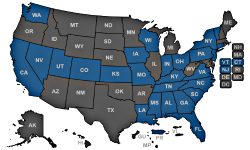 The Electronic Security Association announced the decision to sunset the chartered program following a vote by its board at ESX.

Harlin McEwen will be honored during the ESX Public Sector Luncheon on June 9.

If you are in town the evening of June 7, consider the welcome reception from 6-7:30 p.m. ESX will officially kick-off the following morning with the OpenXchange Breakfast.

Show of Strength for Security Industry at ESX Baltimore

If anyone was scared off by Baltimore’s recent policing problems you would scarcely know it as attendees and vendors celebrate another ESX success.

A ‘Stellar’ Cast of Suppliers

COPS Monitoring earned the accolade for creatively using its CSAA Five Diamond status to gain a competitive edge in the marketplace.

Former Honeywell executive Ron Rothman will be honored with the William N. Moody Award for his dedication to alarm management issues during the 2015 Electronic Security Expo (ESX).