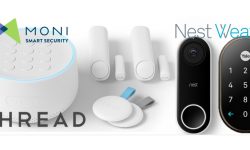 Nest Secure, a new UL-listed DIY security and home automation system with professional monitoring by MONI, can have major implications for IoT protocols.

MONI, Guardian Protection Services and ADT are among the others that received recognition for home security customer satisfaction.

The company will donate up to $10,000 to wounded veteran Noah Galloway’s No Excuses Charitable Fund.

Tablets are placed around the kiosk so that visitors can test how smart home solutions work via MONI’s app.