In the post-9/11 world, increased security levels mandate that high-rise and large-structure building owners and managers address the future growth of their security systems. The life-safety objective is to ensure the facilities can be upgraded as security needs warrant and as new technologies become available.

To that end, Blackstone/Equity Office Properties (Blackstone/EOP), a leading national property management company, recently standardized the security management systems in the lobbies of six of its commercial buildings located throughout the greater Boston area.

Completed in the summer of 2009, the two-year project would entail the installation of electronic turnstiles with Web-based integration of visitor management systems, plus elevator and access control systems, and video surveillance.

Blackstone/EOP appointed Jamaica Plain, Mass.-based Spectrum Integrated Technologies to carry out the installations, which required technicians to oftentimes work off-hours or race to a project site at a moment’s notice.

In 2006, financial services giant The Blackstone Group completed a deal to acquire Equity Office Properties for about $38 billion, which at the time became the largest leveraged buyout in history. No wonder, considering EOP was one of the largest owners of commercial office properties in the United States.

Renamed Blackstone/EOP, among its holdings are the six Class A commercial buildings that Spectrum — a specialist in heavily trafficked structures – has serviced for the past 12 years. Not long after the acquisition, management set forth plans to carry out the complete lobby renovations at the buildings in Beantown’s financial district and other prominent locales.

“Essentially, management’s concept is when any CEO comes into the building they will want to move their company there,” says Steven Feldman, director of Spectrum Integrated Technologies.

Providing a secure facility, while efficiently managing entry and egress, were priorities for Blackstone/EOP. Specifically, the end user sought to afford its tenants a system to pre-enroll visitors who could print a temporary access card at unmanned kiosks, thereby eliminating the need to wait in line for assistance from a receptionist.

To meet its client’s expectations, Spectrum standardized the six lobbies on AMAG Technology’s Symmetry integrated security management system (SMS), allowing building tenants to conveniently pre-enroll visitors via a Web interface. When a guest enters the lobby they are prompted to use an unmanned visitor kiosk, which features a touch-screen display provided by Waltham, Mass.-based Building Engines. The kiosk comes complete with a driver’s license scanner and a card printer — all of which is incorporated in either a free-standing or wall-mounted unit.

“AMAG’s Symmetry SMS delivered the features Blackstone/EOP needed without having to be customized,” says Feldman.

At the kiosk the visitor runs their driver’s license through the scanner and their information is automatically checked against the tenant information. If the data matches, a bar code-enabled guest pass is printed and presented to the visitor. This entry card is enabled for the building’s electronic turnstiles as well as integrated elevator cabs and standard access-controlled doors.

If the visitor is not pre-enrolled by a tenant, Spectrum devised a plan B.

“We have a duplicate system at the concierge desks so that someone can be manually enrolled,” Feldman explains. 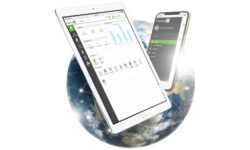