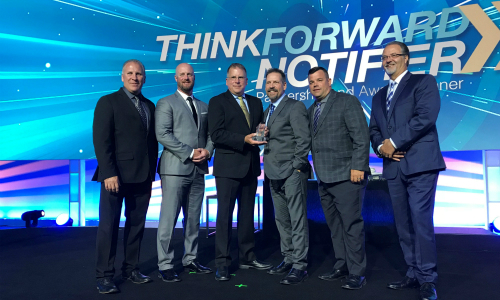 Members of the LVC team accept the Notifer by Honeywell Million Dollar Award at the company’s annual conference.

Since 1994, LVC has been regularly recognized by Notifier winning awards including the Million Dollar Award, President’s Circle Award and Diamond Distributor Awards. The company says its partnership with Notifier over the years has allowed it to serve end users in Minnesota and Arizona with an array of technology needs and solutions including the following:

Related: Are You Up to Date on These Recent Changes to Alarm Notification Requirements?

LVC operates nationally with regional offices in northern and southeast Minnesota, western Wisconsin and Phoenix, Ariz. With technicians that are factory and NICET certified, the company serves clients both locally and nationally in many vertical markets across multiple construction sectors.