The TIMENET Pro Master NTP time server synchronizes the time and date on all computers on a network without having to expose the system to outside Internet sources. 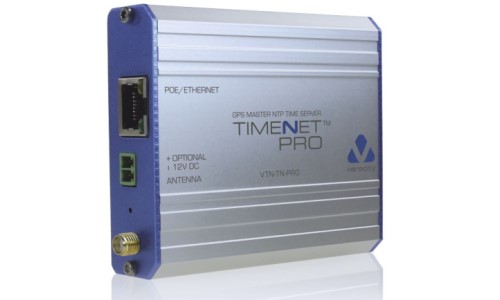 Sometimes we run into fairly niche problem-solver products in the course of planning our reviews. A casino project led us to look at time servers — as you may know, casino surveillance systems need synchronized time for all servers but are often prohibited by regulators from communicating with the outside world via the Internet.

We saw the Veracity TIMENET Pro Master NTP time server at ISC West and, on paper, it seemed to fit the bill for our application. We decided to put it to the test and see just how easy (or hard) it is to set up a master time server for closed-loop networks.

The TIMENET Pro Master NTP time server we tested allows an integrator or end user to synchronize the time and date on all computers in their network without having to expose their system to outside Internet sources.

We were initially reluctant to review a Veracity product; while we have worked with the company’s products in the past (most notably coaxial-to-Ethernet media converters at various customer sites), our history with these media converters was not good, having several go offline repeatedly. 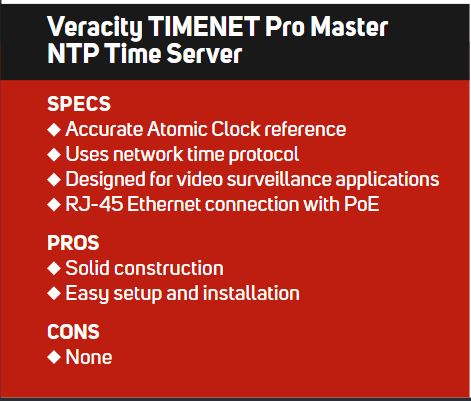 Since that time it appears Veracity has improved the quality of its products. The manufacturer has become the OEM provider for a major IP video surveillance manufacturer that is extremely picky in terms of product quality, which bodes well for Veracity wares’ reliability.

The TIMENET Pro Master NTP time server is actually a very small device, just slightly smaller than a deck of playing cards. The housing is constructed from aluminum and has a solid feel to the casing.

There are three connections to the device: a standard RJ-45 jack that allows the unit to connect to the local network (and get power via a PoE connection), a two-pin auxiliary power connector (if PoE is not used), and a gold-plated SMA coaxial connector. There are also two small aluminum clips that attach to each side and allow the unit to be surface mounted with screws.

The unit is also supplied with a separate antenna that has an approximately 20-foot-long cable attached. The antenna is quite small (1-inch square) and resembles an aftermarket satellite radio antenna. Veracity also provides a mounting kit for the antenna, which includes an alcohol prep pad to clean the mounting surface and a double-sided foam mounting strip.

The time server is really designed to do one thing for you — provide a satellite-based time and date input that allows you to synchronize all computers and other electronic components to the Atomic Clock. This is especially useful for secured networks that require time synchronization and don’t want to risk being exposed to the “outside world” Internet.

It is also useful in locations where there is no Internet service, such as remote monitoring stations or mobile applications like mass transit operations. 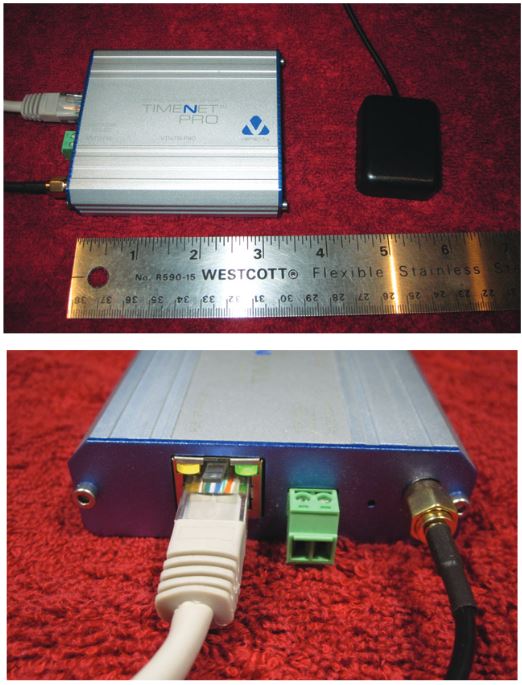 The time server is smaller than the size of a deck of playing cards. The housing is constructed from aluminum and has a solid feel. Its three connections are an RJ-45 jack for net-work and PoE connectivity, two-pin auxiliary power connector and gold-plated SMA coaxial connector.

The product has a fairly straightforward setup to get the unit online and operational. The supplied Quick Setup Guide walks you through the process of initially connecting the unit to the network to be serviced.

We set up a small eight-port PoE switch for testing and added two laptops to serve as “video servers” on our closed test network.

The antenna, being as small as it is, is quite unobtrusive and can easily be mounted in a location that will not bother anyone. For our testing we just placed the antenna on a window sill and it worked just fine.

We first had to set up the TIMENET Pro Master for use on our test network; this was easy using the default IP address of 192.168.42.7. Once connected, we entered the device menu and made the necessary IP changes to correspond to our mini-network.

There are three menu tabs that allow you to see the status of the satellite connections, perform administrative changes and view the TIMENET system settings. All of these are fairly easy for anyone to work through and nothing jumped out at us as being difficult.

Once this was done we went on a separate computer and downloaded the TIMENET Pro Service for Windows software ZIP file. This is required to be installed on all computers to allow them to sync with the TIMENET NTP Server.

The ZIP file includes a detailed setup manual for the installation of the software, so don’t worry about configuration issues. We saved the files to a thumb drive to simulate a remote setup, and installed the software on two test computers.

Once this was done the TIMENET Service page indicated the status and the millisecond difference between the computer and the time server.

The TIMENET Pro Master NTP time server is a handy device for those locations where a secure time/date signal is required or where no Internet is available. The unit is solid and performed as expected for our test network. If a time server is the product for you, you know who you are.