Top 5 Surveillance Videos of the Week: Man with Bucket on Head Steals Pigeons, Falls Off Ladder

Strange things in Florida, a robbery foiled by a former WWE superstar and more in this week’s top surveillance videos.

A thief in Florida was caught on camera stealing pigeons while dressed in a terrible disguise. 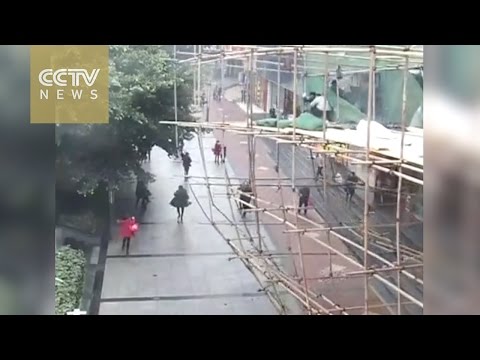 When the owners of El Viejo Lazaro Botanica in Miami, Fla. reviewed their security footage after finding birds and tools missing, they discovered someone dressed in a disguise that can best be described as…bird-brained.

The suspect can be seen wearing a bucket on his head with a trash bag over him like a poncho.

It’s fair to say Florida is well represented in this week’s top surveillance videos, making up a majority of the entries. Click on to see what else it has to offer us this week as well as a scaffolding collapse caught on camera and more!