How SAGE Integration Is Setting the Stage for Success

Launched in 2020, Ohio-based SAGE Integration believes it is building a better mousetrap to capture more meaningful client partnerships. Company execs explain what that looks like and why customers are responding to its holistic approach. 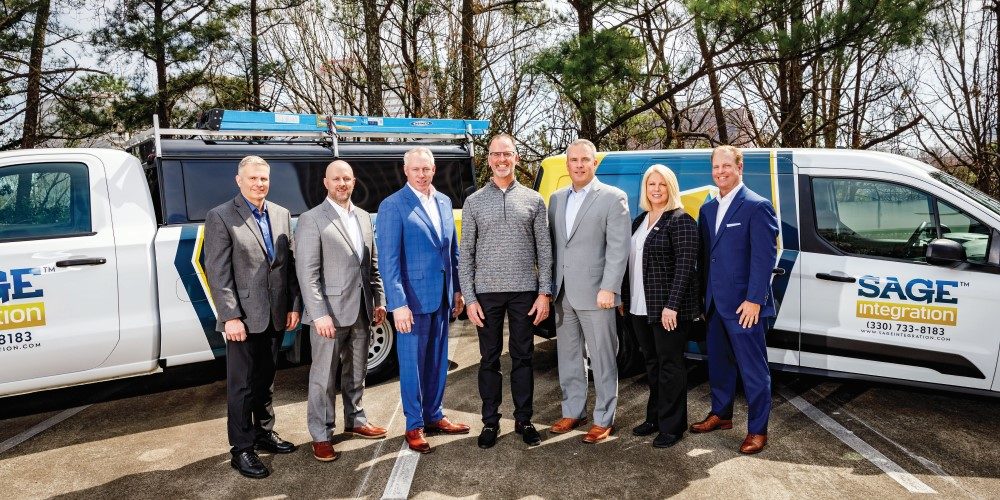 Undeterred by the impacts of a historic pandemic, like a phoenix rising from the ashes, a bold new company emerged in 2020 — a business that has brought a spear to the competitive knife fight of security systems integration. SAGE Integration is brandishing that weapon as a visual representation within its logo and marketing to get across its cultural philosophy of being “at the tip of the spear.”

That imagery is combined with the more traditional industry shield to fully encapsulate the firm’s mission to not only protect assets but also advance its clients’ interests. Leadership believes this sharper focus positions SAGE a cut above the rest.

“We have a goal to get to $100 million by the end of this year, 40% to 50% from loyal existing customers, roughly 40% from M&A and the remainder from organic sales,” says SAGE CEO Eric Frasier. “We are not going to be an M&A shop, which is how a lot of people in this industry build organizations. We’re very strategic; we probably looked at 25 opportunities and not done one. Either the culture doesn’t work or the math doesn’t work.”

Formed by the merger of AYSCO Security Consultants and DTS Security, Kent, Ohio-based SAGE provides commercial/industrial market solutions and embedded services for clientele that includes Fortune 100 corporate accounts (for more, see Fast Facts box). The company’s mission statement is, “to protect the people, facilities and reputation of enterprise clients by advancing the intelligence and integration of security technology.”

Its literature adds that SAGE is “moving beyond boiler-plate solutions to deliver best-in-class solutions” and emphasizes bringing “creative ideas and on-the-ground support to prepare for and mitigate integrated challenges.”

To find out more about how SAGE is taking a stab at the heart of preconceived notions around security integration, Security Sales & Integration convened a meeting of the minds with Frasier, COO John Nemerofsky (a member of the SSI Editorial Advisory Board) and Vice President Jim Geyer. They discuss embracing the fast-evolving marketplace and increasing sophistication around integrating physical security and cybersecurity that is transforming how customer satisfaction is attained.

What is the history of the business and how did it get to its present structure?

Eric Frasier: We have a combination of two businesses that have been around for 33 years and about 10ish years, but really we treat ourselves like a startup with how we seek to innovate. About four years ago, an owner of a business called me to raise some money. They wanted to distribute cameras, and I quickly said, “I have no desire to distribute cameras. That’s a commodity business.”

They had an engineer on staff who was a pretty inquisitive young man, and I asked, “What is it you like to do?” He said, “I think we have a chance to do more with cameras. I think vision analytics had to stop and start 15 years ago and the accuracy wasn’t there, but I think cameras can do a lot more.” That intrigued me, cameras capturing Big Data. So I invested in the company.

They had a big Fortune 500 automotive services customer and together we considered how vision analytics might help them use data in their 2,000+ locations across North America. I sat down with the company president and he said, “I don’t need any cameras.” I replied, “I’m not here to sell you cameras. What are you trying to solve for?” He said, ”That’s a good question. I’m being paid to create a better customer experience.” I asked, “What does that mean?”

He answered, “People don’t like to get their oil changed. They don’t know if we actually do it, because nobody checks. We also have inefficiencies and don’t really know how many cars come in every day. The customer service rep clocks the car in and out to account for an oil service, but if they don’t do that Uncle Joey gets another free oil change. You figure that out and I’ll take your next meeting.”

Off we went to start talking to different people. This engineer had a few ideas and then we met with a group of engineers from Clemson University, their transportation department, which is probably one of the best in the country. They were doing lot of work on freeways, capturing car counts and different car patterns, different types of cars on highways, as a way to create a more efficient highway system for DOTs.

When we regrouped with the customer they loved the concept of what we were trying to build. We built systems using vision analytics at three sample stores to test counting cars, timing cars in the bays, etc. It could create a wait-time component; you could go on your phone and see what the wait-time is while having lunch.

Also, you could watch the work being done through via livestreaming cameras. It also gave you a timer and had ads about things you could do to your car. All this was done with cameras, no human beings. It gave car counts and what you could audit every day. It could say, “OK, this store had 100 cars coming through the POS system but the camera captured 105.” Oh boy, five free oil changes. They truly became more efficient but it was also a great customer experience. Six companies bid on that opportunity and we won.

It was a five-year contract and while it was a great day new challenges arose when they asked, “Can you go find someone to install these?” We were a virtual company. I entered in the world of security integrations. The Wild West, I would say, of security integration. We interviewed all the big players, 18 or 20 different companies, and narrowed it down to six.

We gave each of them three locations and said, “OK, here’s the playbook. Go at it, come back in two weeks and we’ll see how you did.” Two weeks later, all 18 sites were inoperable. That’s when I went, “Uh oh, I’m either running away or going to run toward this business.” Obviously, I did the latter.

We did a lot of research and I became fascinated with the industry. My partner and I spoke to a whole bunch of end users and found most were not thrilled with their integrator. We talked to other integrators and we kept asking them their value proposition. We heard a lot of, “I’m the biggest.” “I’m the second biggest.” “I’m the third biggest.” You know what none of them were saying? “I’m the best.” Nobody focused on quality. They were all focused on size. I’d never seen an industry that didn’t have a clear-cut best of breed. The other part of the industry that was interesting was how fragmented it was. You had four or five players at the top of the food chain and then everybody else.

We jumped in and decided this is the industry we wanted to go after, and do so in a meaningful way. We teamed up with an investor and partner, Talisman Capital. Most people know Talisman for its association with Cardinal Health, which is a Fortune 20 company. They have three businesses they started from scratch and grew them into billions of dollars in value. We were lucky enough to create this partnership. We then went out and bought a company in Ohio, then subsequently bought another one in Atlanta and merged them together. That’s how we got in the business. 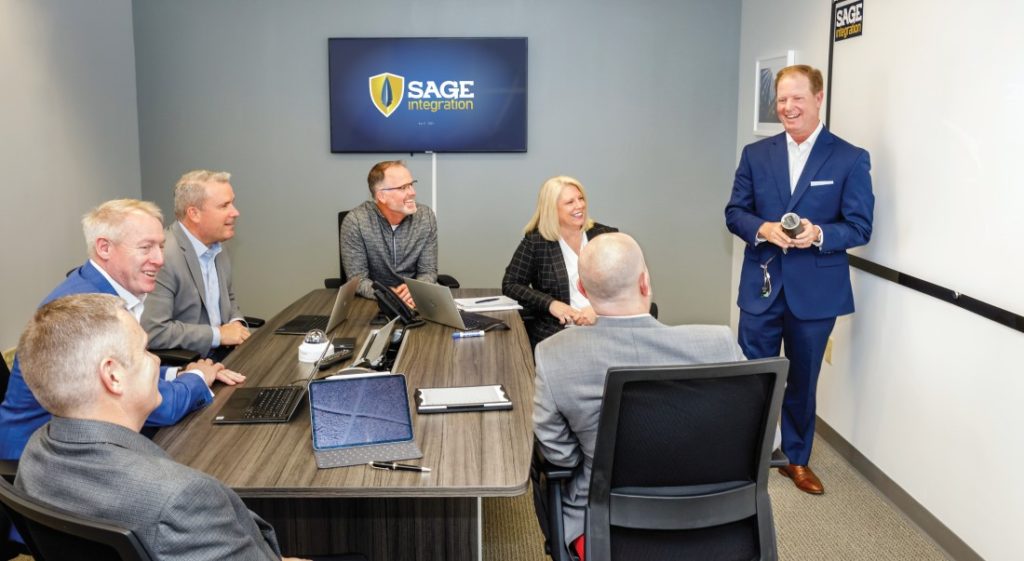 As you go to market, is your play more focused on such operational improvements or on the security aspect? How do you balance that when you present it to end users?

Frasier: I keep the business simple. With this industry, I think creating a repeatable process that won’t embarrass the end user is kind of the table stakes. If you can do that you’ve already vaulted yourself ahead of a lot of the competitors. The competitors have taken their eye off the ball and haven’t focused on process. They’re focused on their size. They’re focused on acquisitions. Nobody’s focused on best-of-breed, repeatable processes. As simple as that sounds, and by the way it’s difficult to do, that’s what we’re focused on — creating that consistent process that people can go to bed feeling good about.

John Nemerofsky: To that end, we’ve put a lot of detail and structure and training around people, process and partners. We measured utilization rates of everybody in the field. We measure their efficiency on every job and service call. We track return trips to service calls. We save KPIs around them. We’re looking for our team to be 95% utilized. We’ve put together incentive plans for people to hit those utilization efficiencies and margin goals and customer satisfaction goals, purchasing goals.

This morning we had a meeting with our purchasing team sending KPIs out for 2021 knowing that we’ll purchase north of $30 million worth of equipment in this timeframe. Purchasing is a key area for the company, and just purchasing 1% or 2% better can draw past a million dollars to the bottom line. We’ve had all our project managers security project management certified, they run the job the same way they use the tools we put in place with Smartsheets and Sedona. They run the project with the end in mind and then build their plan backwards.

Continuing with the people aspect of SAGE, can you speak to the culture you are building around the “tip of the spear” philosophy embodied by the company logo?

Jim Geyer: One of the things that enticed me to come to this company was the culture that was being created. The logo’s shield represents protecting our customers and the tip of the spear represents how we’re empowering our employees on a daily basis. It’s about the communication and visibility we give our employees as to the direction of the company, with the big thing being the messaging. The executive leadership here is all on the same page in messaging our employees and treating them with respect, and the opportunity to grow in our company is huge.

Another piece would be around training. We look at continued training or continued education of all of our employees. A lot of companies will focus on just getting somebody to certify. We not only focus on getting that initial certification but ensure that we continue to help them grow, so they build the resume.

It’s strong for our company, but it’s also very strong for our clients to have those technicians who don’t just learn something once and then retry it 20 times over their career. We do that with our sales team as well. They become vertical market subject matter experts, digging deep into solutions we can provide to our clients, fit their regulatory or internal needs, for HR or legal or whatever it may be.

Keep reading to learn how Sage develops tailored solutions for commercial end users, how the pandemic upended the company’s rollout and more…